Never halting night or day,
My life drains constantly away,
And  from no other source does increase come.
How can there not be death for such as me?

95.
When both myself and others
Are similar in that we wish to be happy,
What is so special about me?
Why do I strive for my happiness alone?

96.
And when both myself and others
Are similar in that we do not wish to suffer,
What is so special about me?
Why do I protect myself and not others?

120.
Thus whoever wishes to quickly afford protection
To both the self and other beings
Should practice that holy secret:
The exchanging of self for others

— Shantideva – Verses from the Chapter 8 of the Bodhicharyavatara

Exchanging Self and Others

Like a dream,
Whatever I enjoy
Will become a memory;
The past is not revisited.

— Shantideva – Verse 36 / Chapter 2 of the Bodhicharyavatara

I know that the day will come
when my sight of this earth shall be lost,
and life will take its leave in silence,
drawing the last curtain over my eyes.

Yet stars will watch at night,
and morning rise as before,
and hours heave like sea waves casting up pleasures and pains.

When I think of this end of my moments,
the barrier of the moments breaks
and I see by the light of death
thy world with its careless treasures.
Rare is its lowliest seat,
rare is its meanest of lives.

If, with mindfulness’ rope,
The elephant of mind is tethered all around,
Our fears will come to nothing,
Every virtue drop into our hands.

— Shantideva – Verse 3 / Chapter 5 of the Bodhicharyavatara

What is the strong rope with which the mad elephant of the mind can be securely bound? It is ‘awareness’ or mindfulness! One must be on one’s guard against any defilements staining the mind or misplaced conceptions taking hold of it. It must be secured from all directions lest falsities disturb it or disturbing conceptions make it restless. The mind has a tendency to rush out-ward and towards external phenomena and identify itself with it. It should be tamed to rush inwards, look within itself and remain unaffected by external phenomena. Great vigilance must be exercised so that the mind does not contract a tendency for non-existent phenomena. Only then will it remain free from the cover of defilements. When so trained, instead of bringing about havoc, it will generate fearlessness and joy.

— Excerpt from the Parmananda Sharma comment of the Bodhicharyavatara

(7) So long as wandering beings fall sick,
May I serve as the medicine,
The doctors and their nurse,
Until they’ve been cured of their illness.

(8) May I eliminate the pain of hunger and thirst
With a shower of food and drink;
And, in the times of the middle eons of famine,
May I myself change into food and drink.

(9) For limited beings, destitute and poor,
May I become a treasure that never runs out
And remain in their presence
As a variety of sorts of useful things.

(17) May I be a guardian for those with no guardian,
A pathfinder for those who are on the road,
And a boat, a ship, and a bridge
For those who would cross.

(18) May I be an island for those seeking an island,
A lamp for those desiring a lamp,
A bed for everyone wishing a bed,
And a servant for every embodied being
who would want a servant.

Bodhicitta – The Vow of the compassionate warriors

Buddhist monks gathered together in Bodhgaya under the Bodhi Tree of Enlightenment.

All mistakes that occur
And all the various kinds of wrongdoing
Arise through the force of conditions;
They do not govern themselves.

These conditions that assemble together
Have no intention to produce anything,
And neither does their product
Have the intention to be produced.

— Shantideva – Verses 25 and 26 / Chapter 6 of the Bodhicharyavatara

The world and its beings are full of aberrations. These various and varied aberrations are the result of dependent originations of phenomena. Causation means both, the main cause and the conditions for a resultant consequence to happen. The seed buried in the earth is the cause and the soil, the sun, the rain are the conditions which cause it to germinate and to become a plant as a resultant consequence. Anger and all the other afflictions, and the whole panoply of negative actions motivated by them – killing, stealing, and so on – are brought about by circumstances. They are not independent or self-governed. Therefore, there is no use exhibiting anger at others’ faults. When no physical object is present, the experience of seeing (on the part of the eye consciousness) does not occur. The same is true mutatis mutandis with hearing and all the other senses. And when there is no seeing or hearing and the like, there is no engaging in positive or negative deeds. Therefore, although anger arises on the basis of the coincidence of an object, the sense power, and the sense consciousness, the gathering of these three conditions does not itself intend to produce anger in a given person’s mind. And the resulting anger is not an entity that regards itself as produced by such conditions. In all of this, there is no trace of an independent, autonomous agent.

“The moth unwitting rushes on the fire,
Through ignorance the fish devours the bait,
We men know well the foes that lie in wait,
Yet cannot shun the meshes of desire.”

— Bhartrhari – “Against the Love of Beauty” 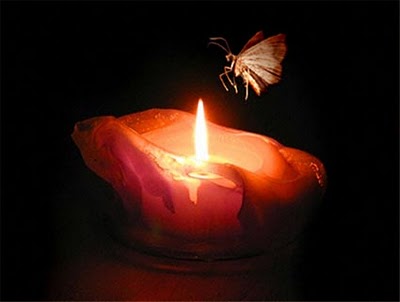 “For beings long to free themselves from misery,
But misery itself they follow and pursue.
They long for joy, but in their ignorance
Destroy it, as they would their foe.”

— Shantideva – Verse 28 / Chapter 1 of the Bodhicharyavatara

By and large, all beings remain steeped in ignorance and delusion. As a result, they rush headlong into abysses of suffering and misery even though wishing to be rid of all suffering. They do so by performing unwholesome acts. The pursuit of unhealthy deeds is the result of ignorance. The delusion that camouflages reality prevents them from seeing through the veil. They are unable to discriminate between what is pleasant and what is good. This leads them astray. The Kathopinisada says:
“The beneficient is different from the pleasing: both lead to different ends.”
Who does not want happiness? Event the tiniest of creatures does. However, all beings have a tendency to drive straight to hell by doing what is pleasing as distinct from what is good – like foolish moths rushing towards a tempting flame of light, to sure death. Desiring happiness, they themselves destroy it, thus becoming their own enemies. Such are people who are suicidal. But, why do they behave in such a suicidal manner? Because of attachment, infatuation. It is this blind infatuation, preventing the seed of enlightenment from generating.

— excerpt from the Parmananda Sharma Commentary of the Bodhicharyavatara

Life is but a dream!
Blog at WordPress.com.