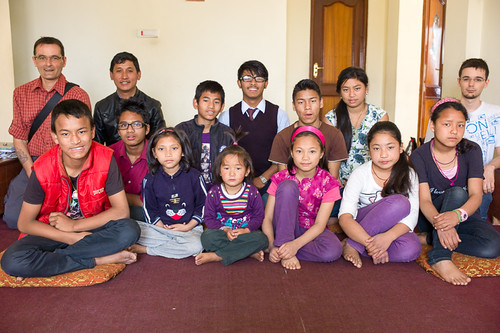 Over 30 per cent of Nepalese live on less than US$14 per person, per month, according to the national living standards survey conducted in 2010-2011. While the overall poverty rate for Nepal is 25 per cent, this figure increases to 45 per cent in the Mid-Western region and 46 per cent in the Far-Western region. In these remote hill and mountain zones, the terrain is rugged, rainfall is low and the poor-quality soil is difficult to farm. Agricultural holdings per household are the smallest in the country.

About 80 per cent of Nepal’s people live in rural areas and depend on subsistence farming for their livelihoods. Household food insecurity and poor nutrition are major concerns in these areas, where about half of children under five years of age are undernourished. Most rural households have little or no access to primary health care, education, safe drinking water, sanitation or other basic services.

The name Bourgandi Children Home is taken from the French region Burgundy which also is the name of an organization in France which is fully sponsoring the food to the children. It is a small children home established on 22nd January 2010 by seven of the members completing the legal procedures to open such organization, taking over a similar organization which was on the verse of collision. Located at Ramhitti-6, Boudha, the organization is currently run by two persons, Mr. Sanjeev Yonjan, the president and Mr. Ghaman Tamang, secretary of the organization. The organization in total consisted of 25 children who were from rural areas of our country like Dolpo, Bajura, Jasin Pauwa, etc. as its targeted areas are the rural ones of the nation. The children living there studies in Gyanmala School together.

The two of the people, Mr. Yonjan and Mr. Tamang who are looking after the organization are professionally into different business. But, because of their keen interest on providing knowledge and shelter to the children from rural areas who are lacking behind, they started with the children home which is providing food and shelter for 25 children from different areas of the nation which no doubt will be getting a better future.

This year I have decided to dedicate my full support to the Bourgandi Children Home. I have already met the kids and Mr. Tamang last year when we sponsored books for the kids. This years’ needs are the same, books and uniforms. The total amount needed is 1100 Euro. I will try to amass as much as possible by fund raising to support the children and the orphanage. If you would like to be part of the project, you can either make an online donation or send me some funds on my bank account.

Donate now for “Bourgandi Children Home”. The donation is processed by my partner betterplace.org