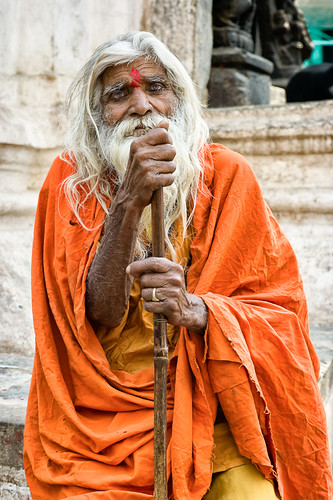 What is the Self? Countless people have asked themselves this question and there have been numberless answers. But as these answers have all been observations expressed in words. What does that mean? All answers on the question “What is the Self?”, when formulated in words can only be from the relative point of view, from a dualistic point of view. It can only describe an object from the point of view of the subject. It is not by an intellectual, empirical and dual approach that the Self can be revealed. But the Self is that through which all is known. It is similar to the eye that can see the manyfold appearances but it cannot see itself. It can see itself as a reflection in a mirror but it can never see itself directly.

This example can be found in the story about the tenth man. Although this story might seem very simple with nothing really interesting to tell us, it is really quiet profound when put into the good context with some understanding.

There were ten men travelling to a very distant village. On their way they encountered a river they were obliged to cross. As the river had a strong current, they decided to join their hands to cross it. But on their way they lost their footing and they had to swim on the other side. Later, on the opposite bank they reassembled and decided to check if everybody had crossed the water. Each started to count the number of men who have arrived and they could only find nine. They concluded that one of them must have drowned and they were bemoaning their loss. Meanwhile a monk passed by and asked them what had happened. They explained their story to the monk, who quickly recognized their mistake. He asked them to line up and count aloud their number as he passed by and hit each of them with a stick on the shoulder. 1, 2, 3, 4, 5, 6, 7, 8, 9… At the end, as he hits the last man and this one calls aloud ‘ten’, they thus realized that they were ten. What had happened is that each man had counted the others and forgot to count himself.

This story illustrates well how the Self is always there but it happens to be overlooked. We cannot see it as the eye cannot see itself. Every attempt to see it will fail as the mind will try to grasp the Self as an object. It is only by turning inward and resting on the thought “I am” that the thoughts, the mind, will be dissolved and eventually our essential Nature, the Self, pure Awareness could be revealed.